Dwarf Cleric and Servant of Gorum

A bit tall for a dwarf at 4’5", Tyrek seems to stand even taller, especially when on the battlefield. He sports a shaved head, long reddish-brown beard, and burn scars over much of his right arm. On his left forearm he sports a tatoo of the symbol of his god, Gorum, which he uses as a focal point to call upon the Lord in Iron to help him obliterate his enemies. His preferred weapon is his greatsword, which is nearly as long as he is tall.

Tyrek hails from Janderhoff in the Mindspin Mountains. Part of a large family and brotherhood of miners, he narrowly escaped death when a mine he was working in was set on fire by goblins. Several of his friends and family members perished in the blaze. Tyrek found his way out, though his arm was badly burned, and his way of life was forever changed. Much of his community was burned to the ground that day by the foul beasts for no apparent purpose other than for sport. He left his home that day with only the possessions he had on him, and wandered Varisia, doing odd jobs, looking for a purpose, and dreaming of revenge.

During his travels, he stumbled across the teachings of Gorum. While never being particularly religious in the past, he was fascinated by the Lord in Iron’s views on the values of strength and power. Nearly penniless and completely destitute, Tyrek learned to channel his rage into devoutly serving his new god, and in turn Gorum’s power began to flow through him as he started his journey to eradicate his world of all monsters. Each one he slays gets him one closer to his ultimate goal.

While merciless against his foes, Tyrek is loyal to his companions, and will risk his safety to protect them on the battlefield (providing they prove them themselves worthy of protection). He feels that the more able-bodied fighters there are against foul creatures the better. He is also fond of enjoying a strong drink with his mates after a well-earned victory before moving on towards the next skirmish. 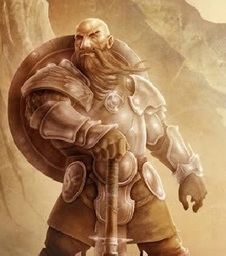