It is rare to see Kensington in good clothing but what clothing he has he will keep neat and clean. Although after a good ride he and Sir Balthazar will look a bit tousled but he is quick to get bristle fashion and in a snap. He is only 2’-11” high and 32 lb. His hair is short Golden Bronze and eyes are Pure Hazel (in the brown family but tends to look yellow orange). He walks upright and stiff as if he was trained to do so. He favors green, and has it in his moss colored cloak and also has a tan over-tunic that hides the type of armor that he wears, although it does make him look a bit bulky.

Kensington likes to address people by their proper title, thats why he always addresses Balthazar as Sir Balthazar, even though it was done as a joke, he has been knighted.

Sir Balthazar is a beautiful brown and white Mastiff that measures 3’ high and 4’ long and weighs 158 lb. He is affectionate and obedient to Kensington and is an intelligent self-confident animal but is dominant over other dogs and is vary defensive to dangerous animals and strangers and will attack or warn them with his earthshaking bark.

It does bring a smile to his face whenever he thinks of the shock that his old master must have had when he fond out that he chose Sir Balthazar as his companion on his next step in life. He liked me more anyways.

Its been a year since then and I am sure he is missing me and his favorite Mastiff Balthazar it is a good thing that the Bellflower Network has helped him out like they have otherwise he might not have made it but it does bring a smile to his face when ever he thinks of the shock that his old master must have had when he fond out that he chose Balthazar as his companion on his next step in life. He liked me more anyways.

Being born into slavery, Kensington has no knowledge of parents or siblings that he might have but instead has learned to take care of his masters prize hunting dogs. It was his job to train new dogs that came into the household, keep them fed, well groomed, make sure there kennels were clean warm and properly maintained.

It is of importance to note that he has not received a proper betting for the sole reason that no slave owner never want to show a bruised up master of the hounds at there parties. When Kensington took the call of the Bellflower it was to help the one less fortunate than himself. It was not until he was freed when he realized that even his life as a slave altho glamorous by most slave standards was just as poor and retched as the rest of them. His now motto (“i have spent to much time feeling sad and beaten, it is now time to feel joyful and be bolder, and if I happen on someone who needs the same it is my duty to free them by any means necessary”) has rang out twice so far. 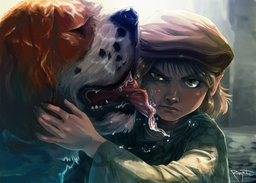