Dominic Baeyn was born in the city Caliphas, in Ustalav. He helped his father keep his pawn shop clean and tidy during the day, and loved to eat dinner with his dad at the local pub after work. He enjoyed listening to all of the colorful stories that people told about the places they had visited. Dominic so wanted to travel but he was destined to take over the pawn shop when his father retired.

One day when he was about sixteen, a group of thugs intent on stealing anything of value, barged in, killed his father, and came after him. Dominic wasn’t fast enough to save his father, but he was able to take one of the thugs down and badly cut another down the left side of his face blinding him in one eye. Seeing that he was outnumbered and about to be captured, Dominic fled out the back entrance of the pawn shop, and headed for the docks. He stowed away on a merchant ship destined for Magnimar, and introduced himself after the ship had set sail. He offered to complete any chores the captain demanded for safe passage away from the murderous thugs that he was running from. The captain agreed and allowed him to stay on-board.

During his trip, some of the sailors instructed him in fighting with swords and knives. He learned a lot from the daily skirmishes that they held on the deck, and the slight of hand tricks that they played on each other after dinner. When the ship arrived, the captain gave Dominic a few pieces of gold and wished him well in his travels.

Not knowing anyone in Magnimar, Dominic decided to try out his new skills at snatching things from unsuspecting people. He survived on the streets for several months this way, but his luck ran out when he tried to snatch the coin purse of one of the mayor’s aids. He was arrested and brought before the mayor, who seeing his skills though untrained were promising, offered him a choice. Stay in jail and be branded a thief, or join the Order of the Black Arrows and become the first line of defense against the ogres and giants for the people of Varisia.

Dominic chose to join the Black Arrows and was sent to Fort Rannick to begin his training. He wrapped himself up in his studies and soon became a full fledged member of the Order. He excelled at his training and was given orders to take newer recruits out on scouting expeditions. He taught them how to track and surprise their targets, but most of all to watch the backs of their fellow brothers. 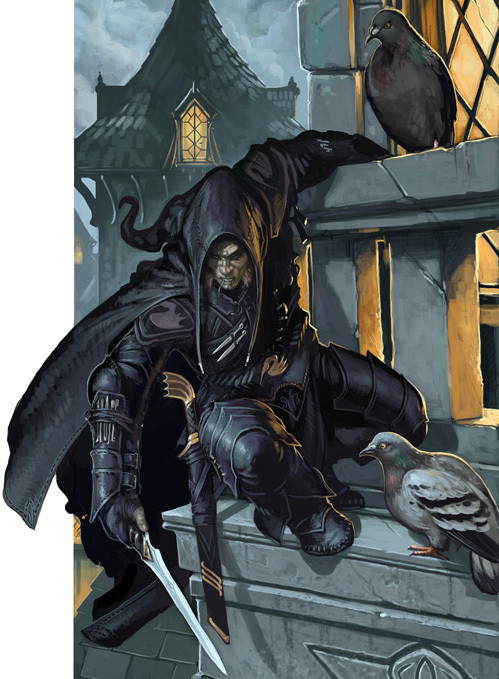