You think he's a dwarf... but dwarves don't usually growl.

Bjorn was always odd for a Dwarf… but it wasn’t until he was trapped in a cave-in one day that he really began to realize his gift.

He was trapped in that cave with a Bear and after days of cat-and-mouse with it there began an uneasy understanding between the two. He searched every day but no matter how hard he tried, he was unable to find a way out. There was, however, a small stream that came through the wall and it provided enough fish for them to survive.

A year later, in an expedition to find new sources of various rocks and metals, there happened a crack into the wall of the cave. The dwarf, that had initially created it, came barreling out of the shaft screaming something about bears as he passed his team. The leader of the expedition grabbed his waraxe and went to see what was going on. Those members who had looked in before he arrived mentioned they had seen a pair of bears inside. He cautiously entered the cavern.

After a mighty battle that ended with the bear being slain he turned his attentions to the other occupant. It was only recognition of his nephew that caused him to slow his axe at the last second and spare Bjorn’s life. He called for his dwarves and they all piled on to subdue the enraged young dwarf.

It took a few years to get him back to being able to, at the very least, be on the fringes of what passes as polite society amongst the dwarves. He was then sent to a mountain outpost where he could learn to control his rage amongst the warriors who guard the Great Passage.

He’s come to Sandpoint as a member of a trade caravan hauling stone and metalworks to their merchant contact. 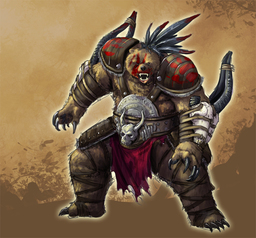