Biru is a female gnome just under 3 feet tall with large dark eyes and bright blue hair. As part of the fey, she is able to be quite stealthy and, when bored, loves to play pranks that are funny to her alone. She doesn’t understand all the rules that the other races place on themselves and is frequently thought of as odd and, sometimes, off putting.

After spending some time with a group of dwarfs, she began to understand why they didn’t enjoy the disappearing rock joke. The colors and sparkles that could be brought forth from humble stones like rubies and diamonds really were something to behold! She became completely obsessed with gem stones. She is constantly on the hunt for new unearthed stones and new ways to make them sparkle. Once she becomes enamored of a stone, she will often go through great lengths to obtain it. She doesn’t understand the value society places on them as she considers them just part of the pretty rocks in the world, but she does get that some individuals feel the need to trade items or goods for the stones. Often the previous owner of a coveted stone will find herbs, berries, or other “valuable” items left in the place of their vanished gemstone. She rarely trades or sells her gems for anything; instead she spends time with each gem trying to perfect the cut of each stone and adds it to her growing collection.

She often joins groups as a guide or forward look out to travel and discover new stones. To date, she has not found any group entertaining enough to travel with for longer than a few trips. 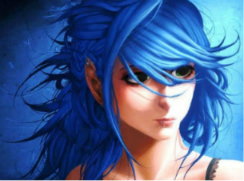